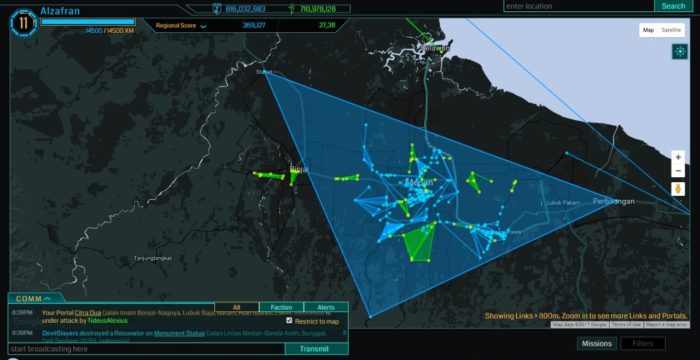 On Thursday, 30th November 2017, there was an “Anomaly” happening on AS09-KILO-08. Both Resistance and Enlightened were strive to control XM and human Mind Units.

The war between the two factions was inevitable. The day before, our RES agents spread the tunnels & smashed any block links across the plan.
Our agents must fought fiercely many times. Even agent @DevilSlayers had to battle against 4 ENL agents at once! At first, we were succeed to make big double-layered CF from Stabat (@DevilSlayers) – Perbaungan (@MaDJPN & @aglisa251112) – Sibolangit (@lilmagic & @Nightmarish34) at 08:46 PM GMT+7. But something fast happened, the ENL somehow could make even bigger CF from Samosir Island (@Alexyiie & @Semangat) – Lhokseumawe (@rYaiwA & @DoctorJu99) – Penang and covering AS09-KILO-08 & AS09-KILO-12 completely at 09:36 PM.

The Portals in Samosir Island and Lhokseumawe are known to be inaccessible at night which was a very good move to place some agents on those specific portals. In this case it was impossible for us to take down their anchor portals at that time.

Lack of strategies, and outnumbered, the ENL outsmart us and finally gain their victory at 11.00 PM GMT+7:

We would like to give thanks to all participated agents from both faction, especially to our RES Agents who have fought gallantly through hard conditions in two days straight (most of the obstacles were rainstorm and flood).

And, of course, spoofers are everywhere when it comes to anomaly. Here is the list of the reported & banned agents during the event:

Yes, this is maybe our defeat, but we will never surrender. We know that Resistance’s agents around the world will never stop resisting against the shapers’ lie.