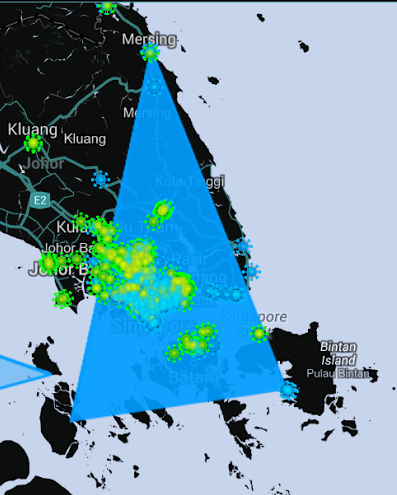 After the announcement of Singapore as a satellite cell for Interitus, an
idea was hatched to gain some MU points for the Resistance of AS-09-LIMA-13
using layered fields. A recruitment then started to gather agents around
the region to plan and prepare for the operation.

The Saturday before the operation, Agents @Cass and @fourman traveled to
Mersing to farm for keys, passing them onto agent @GeneC. Keys from Kundur
and Bintan were already farmed by @Grounde and @Tjoe in the weeks before
the anomaly in case they would ever be needed, while keeping the portals
alive at L1. The key exchange between @GeneC @wywy and @Tjoe occurred on
Tuesday night, where the fielding plan was finalized.

The operation was targeted on Saturday 9pm (penultimate) checkpoint, where
there will be a total of 12 layers anchored at Mersing (2 hours drive away
from the nearest ENL agent), Kundur and Bintan (after ferry services to
these two islands have ended). Agents also have to be stationed at Karimun
and Batam to clear blocking links just before the operation start.

Saturday, the day of the operation, came and started with the clearing of
blocking links in Johor Bahru with 2 teams led by @marcussew and @fourman.
@janusgaruda from SG was also activated to clear a link that was
inaccessible from the Malaysian end. A late blue blocking link that almost
foiled the plans was cleared with a timely Jarvis virus by @AlQudsy who was
activated in very short notice through @rockhwd. The final blocking link
was timed to be cleared at 8:45pm, and the fielding operation began.

5 stacks were built with agents at Mersing and Bintan linking to Kundur.
This was completed in 2 minutes before agents in Bintan began to move on to
the 7 other anchors to build the remaining 7 fields. As this was happening
ENL spoofers that have previously been active in Singapore appeared at both
the Mersing and Bintan anchors and started attacking the anchors.
Inevitably, the field was brought down despite the best efforts of the
agents on the ground trying to defend the portals and rebuild the field.
Unfortunately, the team was unable to keep any fields up for the
checkpoint. We did however, manage to clock around 24M MU in total for the
6 fields created.

Nonetheless, we are satisfied with our achievements. We have successfully
executed our first RES fielding operation involving agents from three
regions – Singapore, Malaysia and Batam, Indonesia. We would like to thank
all the participants involved for the teamwork, dedication and
determination in achieving the fields created, although we did not get our
just reward with checkpoint MUs due to the deceitful actions of a couple of
individuals.