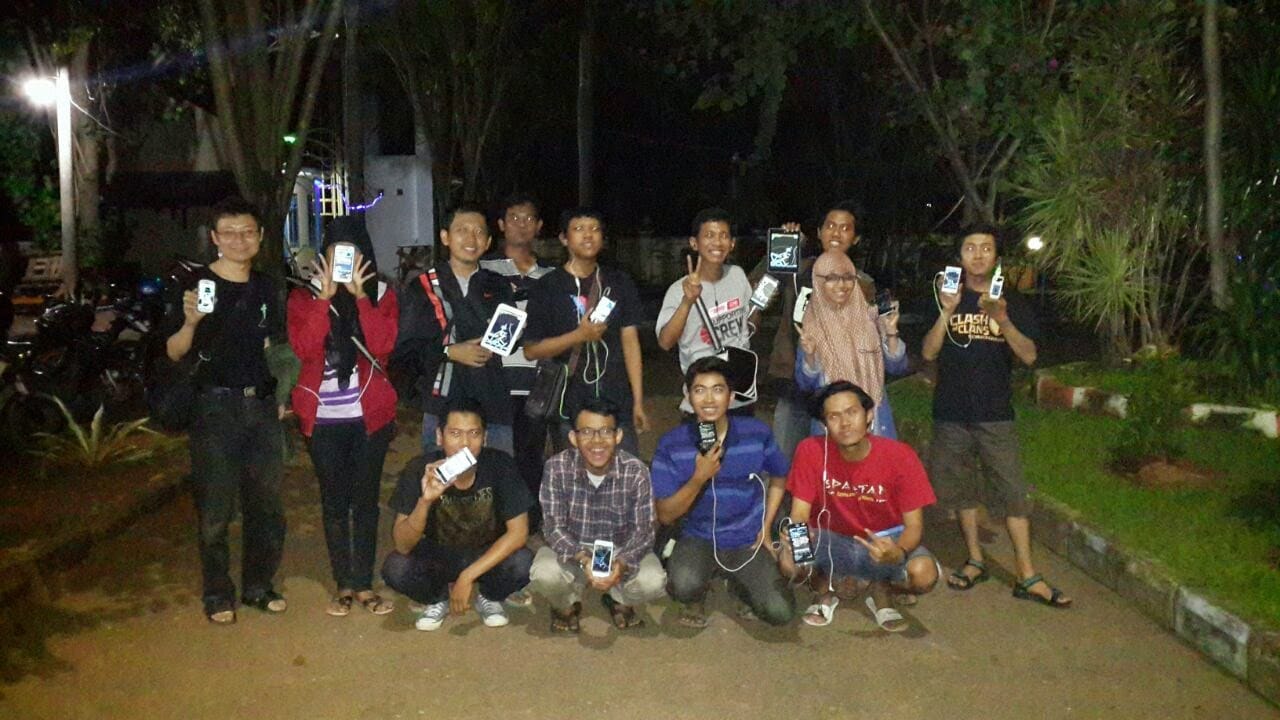 On May 7th 2015, Ingress announced the Lightman Shard. Soon, it alerted Semarang Resistance since one of the Shards was spotted in presumably Central Java. We speculated Borobudur Temple as the location due to the ancient civilization clue. Shortly after that the Fast Response Team was quickly assembled which consisted of other regional’s agents in Indonesia too. Our guess was that the shard would be on Candi Borobudur portal.

The next day, at 7 am UTC+7 local time, the guess was a jackpot; Shard #20 – Dirman (Sudirman), spawned on the Candi Borobudur portal! Yogyakarta Resistance quickly sent a team to guard the shard until its first jump. Meanwhile, team Semarang helped to clean cross links and create block links around Ambarawa and Ungaran. Agent @Shamankingss and @BangsawanCicak went directly to Ambarawa, cleared green portals and links along their way and in the same time agent @FumaKillas was on standby in Ungaran. They worked quickly in order to clear the path and move the shard to a portal in Ungaran.

Getting closer to 6 pm, team was on standby, a link was made from Candi Borobudur to Ungaran and the war for #20 – Dirman began. We were sure that we secured the shard jump as Borobudur gate closed an hour before jump. No visitors were alowed after the gate closed and and we left the link intact inside. Agents were quickly joined by the shard crew at the target portal at Ungaran. Teams were ready to stay overnight guarding the target portal. Food & clothes prepared and agents were on their way to the meeting point when the jump time got closer. Unfortunately, a few minutes before the jump time, the origin portal in Borobudur was Jarvised by @pabusacilad from ENL. At 1st jump, ENL were able to divert the shard to their safehouse in Taruna Nusantara Senior High School, Magelang.

Day 2 – Shard Escape to Tegal
#20 – Dirman did not jump in the 2nd jump time, and remained in the restricted area. Having no option to pick up the shard in time, we decide to go with a defense strategy and force a random jump. Team Semarang 1 was created in order to build blockers, keeping the shard from moving further away. Team led by agent @Batlador, followed by @Ucil26, @Cumisaurus, and @Inside0, went to Parakan around 4 am to create block links fort which separated Tegal from Magelang.

Main blockers were done before noon, with links from Parakan to Ungaran, Ambarawa, and Kebumen. More blockers were set up afterwards. Meanwhile Team Semarang 2 (@Palagan @Qiyamullail @Shamankingss @BangsawanCicak) were a backup team, ready at any given time if the shard jumped out from Magelang.

Our blockers got taken down one by one by Enl. Several green tunnel links were up from Parakan to Tegal. #20 – Dirman was moved by Enl from Magelang to Tegal at the 3rd jump, a city where there is no active RES agents.

Day 3 – The Battle of Tegal & Pekalongan
With great regret, we pushed our spirit to take back Dirman into Res possession.  Around 9 pm 5/8, when agent @Palagan was ready to go to bed, Intel team ordered Team Semarang 2 to depart to Tegal that same night!@Palagan was in panic mode since he needed to gather the team and find transportation ASAP. He then immediately contacted @BangsawanCicak to find a rental car in less than an hour. @BangsawanCicak with all his royal luck (a pun intended for his IGN) found a car and 7 agents were collected and Boom! Team #KetjehBadai  was formed and at midnight, @Palagan @BangsawanCicak @Qiyamullail @Shamankingss @Ucil26 @Cumisaurus and @Inside0 headed to the battlefield.

On their way to Tegal, they stopped for awhile in Pekalongan to get the care package provided by @Ilcharama. The team arrived around dawn 5/9, and started the day with the Morning Prayer. Although the team was tired and so sleepy from the long night trip, they stayed awake to start briefing for a plan to kidnap Dirman. Their most important plan was to stay hidden and quiet, but agent @Shamankingss accidentally (or maybe deliberately?) pressed fire!! The others were hit by panic attack since ENL agents @Listrik and @justkidz moved quickly around Tegal after the alert. Agents @Palagan decided to divide the team.@Palagan, @BangsawanCicak and @Inside0 were ready around the shard portal while the rest did the cleaning and tunneling.

ENL were able to put up a fight by making block links to buy some time but our team was super ready for combat. One by one, their blocker was taken down by the cleaning team. Just minutes before the jump, the shard portal was linked to Pekalongan by @Palagan and the rest of the team gathered to the site to defend the portal. The green team were still fighting us but our P7 stood strongly against them and voila! RES moved the shard to Pekalongan in the 4th jump.

Pekalongan is not only the city of Batik but also the city of @Ilcharama! The agent offered his home for the team to rest; bless the Ilyas family! Team #KetjehBadai finally regained their energy and planned their strategy then directly head to the shard portal after lunch. The shard portal was located in a tourism site on the beach and the team intentionally came early to strengthen the tactics. It was few hour before the jump but there was no ENL in sight. We were a bit curious about their strategy.  But we didn’t let our guard down.

Right after the Afternoon prayer, agent @Palagan was super lucky to find ENL agents hiding and spying, “So, this is where you’ve hidden!” he shocked the green team. It appeared that ENL wanted to give a surprise attack, yet they were the one who got surprised. The ENL ambush attack was denied.
Knowing that their plan was no longer a plan, they got off of their no longer secret ‘vehicle’ and moved closer to the portal. The teams had a small chit chat before the battle.

30 minutes before the jump, all eyes were fixed on Pekalongan since the battle had begun. We stuck with the plan to deliver Dirman to Pramuka Island, where another team was ready to receive the shard. In the beginning, we controlled the portal and even a link to Pramuka Island was established. But the 8 agents of Team ENL were able to take over the portal from RES. Link destroyed, portal neutralized, ENL captured the portal and bang!! link to Karimun Jawa was up. 6 minutes left before 7 pm, RES was able to get the portal back and defended it with all our might. @Cumisaurus tried to make a link to Pramuka but ENL were able to make a block link beforehand. In the time of crisis, captain @Palagan came to a decision. He decide to evacuate #20 – Dirman to a safehouse portal in Semarang. The link established and the team kept defending the portal until eventually Dirman jumped to Semarang at the 5th jump! Another victory for Team #KetjehBadai and RES Indonesia!!

Day 4 – Shard #20 extracted from Semarang
The next morning, RES were still in discussion about the plan when we got the alert. In less than 30 minutes before the jump time, ENL were able to infiltrate and Jarvis our safehouse portal and create a link to a portal in uptown Semarang. We spent the whole weekend just for the shard and SURELY didn’t want it to stay long in Central Java. So, in a rush @Cumisaurus went to the target portal to Jarvis it. Link destroyed just in time, very close to jump time. At 6th jump time, #20 – Dirman stayed where he was.
The safehouse portal was proven not safe anymore. Thus we decide to deliver Dirman as soon as possible out from Semarang. In the afternoon, 3 agents @Ilcharama, @Shamankingss and @Ucil26 were sent to guard the portal, waiting to take control of the shard. As precautions if something happened, agents @Zulfie, @ZulZel and @Adipanpan(now @Hemigaleus) were contacted to stand by around Semarang, ready to dispatch. @BangsawanCicak, @FumaKillas & @Palagan each dispatched to Kudus, Pati, and Demak, clearing blockers that set up by ENL, while also set up our own blockers to deny shard movement. All prepared for the worse.

Semarang Resistance had worked extra hard for 4 days. Agents traveled to remote areas, cleaned green links, created block links, and went to battle to make sure that the Resistance can deliver the shard to its goal portal. A small celebration wasn’t a sin. Some agents gathered to share stories and even @Ilcharama got special entertainment by the infamous Tamara; the local street singer.